I totally forgot to post my December Book Haul since a lot of things happened to me. Believe me, the past 3 months were the worst months I’ve experienced but now, I’m actually doing okay, great even, and I’m happy to be in the state where I am right now. 🙂

PS: Those magnetic bookmarks are from craftedvan and it makes my reading life more enjoyable. ❤ 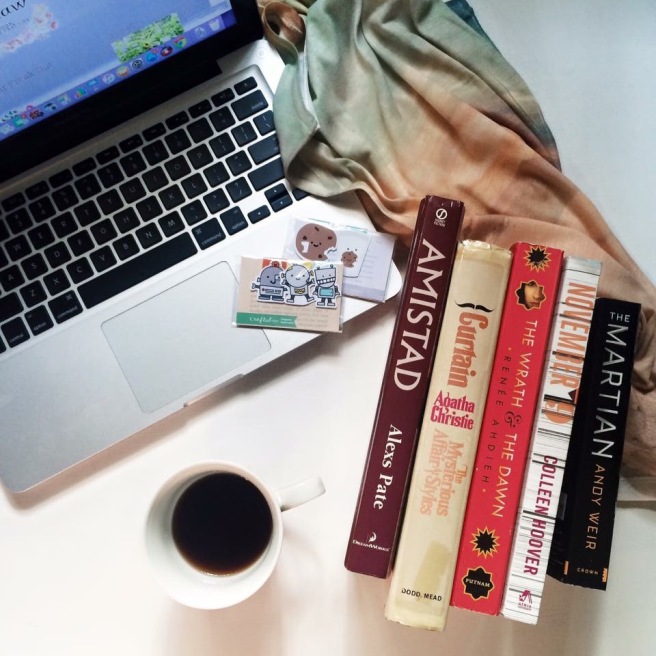 Okay, so back on track, these are the books added to my book family. I actually bought only 2 out of 5 books, and those 2 are Amistad and Curtain & The Mysterious Affairs at Style. The rest (November 9, The Wrath and the Dawn, and The Martian) were gifts and I am so happy to have them! 🙂 🙂

Based on the true story of the 1839 mutiny on board the Spanish slave ship, Amistad, here is the frightening sequence of events that led fifty-three young men and women – and one young nation – to seek freedom and justice for all people. Amistad is the story of Cinque, the illegally enslaved son of a Mende chief who led an uprising full of fury and courage. It is also the story of John Quincy Adams, the former American president, who reluctantly heeded the call to justice and defended Cinque in a Supreme Court trial that would alter the nation’s history. And it is the story of men and women searching to find truth and to uphold the basic tenets of the American Constitution. Brilliantly narrated by award-winning novelist Alexs Pate, Amistad celebrates the human spirit’s profound determination to fight, hope, and to be free. || Goodreads

Curtain & The Mysterious Affairs at Style by Agatha Cristie

The house guests at Styles seemed perfectly pleasant to Captain Hastings; there was his own daughter Judith, an inoffensive ornithologist called Norton, dashing Mr Allerton, brittle Miss Cole, Doctor Franklin and his fragile wife Barbara , Nurse Craven, Colonel Luttrell and his charming wife, Daisy, and the charismatic Boyd-Carrington. So Hastings was shocked to learn from Hercule Poirot’s declaration that one of them was a five-times murderer. True, the ageing detective was crippled with arthritis, but had his deductive instincts finally deserted him? || Goodreads

Poirot, a Belgian refugee of the Great War, is settling in England near the home of Emily Inglethorp, who helped him to his new life. His friend Hastings arrives as a guest at her home. When the woman is killed, Poirot uses his detective skills to solve the mystery. || Goodreads

Fallon meets Ben, an aspiring novelist, the day before her scheduled cross-country move. Their untimely attraction leads them to spend Fallon’s last day in L.A. together, and her eventful life becomes the creative inspiration Ben has always sought for his novel. Over time and amidst the various relationships and tribulations of their own separate lives, they continue to meet on the same date every year. Until one day Fallon becomes unsure if Ben has been telling her the truth or fabricating a perfect reality for the sake of the ultimate plot twist. || Goodreads

The Wrath and the Dawn by Renee Ahdieh

In a land ruled by a murderous boy-king, each dawn brings heartache to a new family. Khalid, the eighteen-year-old Caliph of Khorasan, is a monster. Each night he takes a new bride only to have a silk cord wrapped around her throat come morning. When sixteen-year-old Shahrzad’s dearest friend falls victim to Khalid, Shahrzad vows vengeance and volunteers to be his next bride. Shahrzad is determined not only to stay alive, but to end the caliph’s reign of terror once and for all.

Night after night, Shahrzad beguiles Khalid, weaving stories that enchant, ensuring her survival, though she knows each dawn could be her last. But something she never expected begins to happen: Khalid is nothing like what she’d imagined him to be. This monster is a boy with a tormented heart. Incredibly, Shahrzad finds herself falling in love. How is this possible? It’s an unforgivable betrayal. Still, Shahrzad has come to understand all is not as it seems in this palace of marble and stone. She resolves to uncover whatever secrets lurk and, despite her love, be ready to take Khalid’s life as retribution for the many lives he’s stolen. Can their love survive this world of stories and secrets? || Goodreads

The Martian by Andy Weir

Six days ago, astronaut Mark Watney became one of the first people to walk on Mars. Now, he’s sure he’ll be the first person to die there.

After a dust storm nearly kills him and forces his crew to evacuate the planet while thinking him dead, Mark finds himself stranded on Mars’ surface, completely alone, with no way to signal Earth that he’s alive — and even if he could get word out, his supplies would be gone years before a rescue could arrive.

Chances are, though, he won’t have time to starve to death. The damaged machinery, unforgiving environment or plain-old “human error” are much more likely to kill him first. But Mark’s not ready to quit. Armed with nothing but his ingenuity and his engineering skills — and a gallows sense of humor that proves to be his greatest source of strength – he embarks on a dogged quest to stay alive, using his botany expertise to grow food and even hatching a mad plan to contact NASA back on Earth.

As he overcomes one seemingly insurmountable obstacle after the next, Mark begins to let himself believe he might make it off the planet alive – but Mars has plenty of surprises in store for him yet.

Grounded in real, present-day science from the first page to the last, yet propelled by a brilliantly ingenious plot that surprises the reader again and again, The Martian is a truly remarkable thriller: an impossible-to-put-down suspense novel that manages to read like a real-life survival tale. || Goodreads

I’m so happy that I finally got The Wrath and the Dawn and The Martian since I want to read them sooooo bad. By the way, those two books that I bought were worth 180 (more or less $5.00) and I think it’s a great find considering that they’re still in good condition and hard bound. 🙂