Sixteen-year-old physics nerd Aysel is obsessed with plotting her own death. With a mother who can barely look at her without wincing, classmates who whisper behind her back, and a father whose violent crime rocked her small town, Aysel is ready to turn her potential energy into nothingness.

There’s only one problem: she’s not sure she has the courage to do it alone. But once she discovers a website with a section called Suicide Partners, Aysel’s convinced she’s found her solution—Roman, a teenage boy who’s haunted by a family tragedy, is looking for a partner.

Even though Aysel and Roman have nothing in common, they slowly start to fill in each other’s broken lives. But as their suicide pact becomes more concrete, Aysel begins to question whether she really wants to go through with it. Ultimately, she must choose between wanting to die or trying to convince Roman to live so they can discover the potential of their energy together. 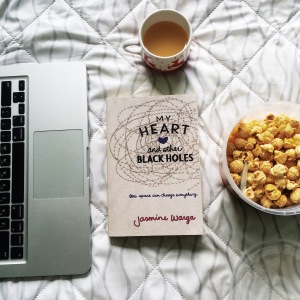 “Life can seem awful and unfixable until the universe shifts a little and the observation point is altered, and then suddenly, everything seems more bearable.”

I’m sure that at one point of our lives, we experienced being so down that we thought the pain is never ending, that good days won’t come, that it’s you against the whole damn universe, and just wonder how could this world and life be so cruel and suck at the same time. But I think that amidst all this, there are surely good days. There are times when we know that we are on top of the wheel, that the luck is on our side, and that we’re going to make it.

“Maybe we all have darkness inside of us and some of us are better at dealing with it than others.”

This book really touches my heart. As you know, I have this thing for suicidal books (not because I feel like one) but maybe because I have understood that in every person, there are wounds he’s trying to heal. I was in for about 28 pages when I suddenly realize that I’ve never read a book as sad as this. Anyway, after being in a reading slump mode, I finally finish a book. It feels good, actually. 🙂

“Something inside me clicks. It’s like I’ve spent my whole life fiddling with a complicated combination only to discover I was toying with the wrong lock.”

My Heart and Other Black Holes is a story about Aysel trying to find an exit in this world but she’s too afraid that if she tried to kill herself, she wouldn’t succeed and there’s nothing more worse than an unsuccessful suicide attempt. But first, why did she want to kill herself so bad? It’s because she’s so tired to be the daughter of a man who murdered a supposed to be first-olympic-athlete-in-her-town. She’s tired of all the whispers, the looks, and the dark thought that maybe, just maybe, she will become a murderer too, and she can’t risk to hurt anybody just like her dad did. So she decided to find a suicide partner, and she ended up with Roman. Roman, like Aysel, has a very sad story that lead him to decide in ending his life. There’s one agreement in their planned death, it should be on April 7th and they would jump off a cliff down to the river. But as the date gets nearer and nearer, Aysel find herself seeing her life in a different perspective, and for the first time in a long time, she could feel hope. The only problem is, she needs to let Roman see too, that their life may suck, but it could be good too. That maybe the pain will always be there, but it could be tolerable, somehow. And Aysel needs to let Roman know these things before it’s too late.

“Sometimes I wonder if my heart is like a black hole–it’s so dense that there’s no room for light, but that doesn’t mean it can’t still suck me in.”

I like everything. Starting from the characters and their messed up life, to Warga’s writing style, to the plot twists, and even the ending. It’s just full of sadness and emotions, and I’m at awe that this 320-page book was able to convey one of life’s great lesson: Be kind, for everyone you meet is fighting a hard battle. Okay, so for the characters, I like that they’re so human- so fragile. I like that this book show how hard depression is, and it’s finally time to raise more awareness in this topic since lately, a lot of people are experiencing this and we would like them to know that they could get the help they need because we all understand. Above all this, I am super proud of Aysel and her guts to see her life in a different perspective  under dark circumstances. It was really hard to find a shed of light in a dark closed room. But I think, I admire more Roman among all the characters. I think his life will never be the same, and the guilt and sadness would not be gone easily, but he still chose to accept those shitty things anyway. On the other hand, the writing style is easy to get used to. Warga used a very typical Young Adult writing style, and you wouldn’t even noticed that you’re about to finish the book. Lastly, the sequence of events were well organized, and it made me continuously flipped the page because I need to know more. However, there are things I wish I knew, like how is Aysel’s father and such, but this is a 21st-century-story, a day-to-day story, a-matter-of-fact story, so I guess, the ending gives justice to the whole story anyway.

“I wonder if that’s how darkness wins, by convincing us to trap it inside ourselves, instead of emptying it out. I don’t want it to win.”

This book just fell into my favorite. It was really nice to find a book that teaches you that the least we can do to others is be kind because we are all facing our own battles. Maybe, it’s such a small thing for you to be kind, but on the other note, it maybe a big deal to another person. Being kind wouldn’t cost so much, right? 🙂

“You’re like a grey sky. You’re beautiful, even though you don’t want to be.”

Jasmine Warga lives in a small town, a few miles outside of Cincinnati, Ohio. She likes animals, especially her cat, Salvador, and her puppy, Scout. She also likes surrealist sketches, iced coffee, the night sky, old swing sets, music, and rainy mornings. Her second novel, which is currently untitled, will most likely be published this 2016. To know more about her, head on to her website.